In it for the Long Haul: How No-Code Keeps Delivering Value, Year After Year

By speeding development 3x or more, no-code helps incumbents catch up with digital leaders, adapt quickly to change, and deliver value over the long term

“Every business is a software business,” declared tech pioneer Watts S. Humphrey two decades ago. Each year, CEOs repeat Humphrey’s adage. And each year, as software winds its way deeper into every function of the business, it becomes more true. To deliver value, organizations must therefore commit to delivering new digital services to customers, employees, and partners—not just today, but over the long term.

If you have any doubts, consider the top-five largest global companies. Between 2010 and 2020, Amazon, Alphabet, and Facebook knocked behemoths Exxon, PetroChina, and ICB from the list. All three newcomers were digital-first enterprises. They captured markets early, and then continued to innovate relentlessly. The two survivors—tech giants Apple and Microsoft—stayed at the top by using deep pockets to fund similarly aggressive digital transformations, year after year.

On the other hand, incumbent enterprises, especially those in compliance-heavy sectors like financial services, healthcare, and government, have found themselves unable to keep up. Many factors contribute to their slow adoption of digital services. Their tech stacks are an increasingly complex hodgepodge of legacy systems that have stymied integration. The risk of non-compliance also slows innovation. And digital transformation is a risky affair—consider that some 85% of custom software development projects went over schedule and 70% of large-scale initiatives failed to reach their stated goals.

Digital transformation can never be seen as a one-and-done occurrence. The constant emergence of new technologies, business models, and competitive threats requires constant innovation. If, for example, virtual reality suddenly becomes the next must-have six months from now, slow-moving incumbents will fall even further behind.

And falling behind is particularly perilous these days. Digital leaders are snatching an ever-larger share of the markets in which they operate. That leaves laggards to battle each other for an ever-smaller piece of the pie. According to a recent BCG study of the telco industry, digital leaders increased market share by an average of 7% between 2012 to 2017, while laggards saw their market share drop 11%. “Digital’s continued contribution to company performance means that gap will likely grow,” conclude BCG analysts. And no industry is immune. This principle “holds true across a wide range of industries,” they write.

Fortunately, the advent of no-code is changing the economics of digital innovation. With the right no-code platform, incumbent organizations can quickly catch up with digital startups—and keep innovating over the long term. Development with the Unqork’s no-code platform, for example, is “a minimum of three times faster and three times less expensive” than the company's previous approach, says James McGlennon, CIO of Liberty Mutual.

As the world’s first true enterprise no-code solution, Unqork also embeds enterprise-grade security and compliance deep in the DNA of each new digital offering. As a result, even organizations in compliance-heavy sectors can dramatically speed development.

In short, no-code is driving down the cost of digital innovation. And not just for a one-off project. Incumbents that catch the wave will quickly find themselves within striking distance of digital attackers. For this reason, Forrester expects the market for platforms like Unqork to grow at 40% a year, reaching $21.2 billion by 2022.

The ways to grow value through digital innovation are endless, vary from industry to industry, and are sure to evolve as disruptive new technologies and trends emerge. But when you are able to quickly and cost-effectively develop new digital services, change becomes an ally rather than a foe. With that in mind, let’s consider seven ways no-code helps future-proof your organization, so you can deliver long-term value.

In the past, user-facing digital services required costly and time-consuming development of custom integrations to backend applications and data sources. The other unhappy solution: Ripping and replacing existing systems.

With a no-code platform like Unqork, you don’t need to make changes to underlying systems. Thanks to an extensive library of pre-built APIs, Creators can quickly and seamlessly connect front-end elements, back-end processes, and third-party integrations. Even when databases lack a “wrapper” that enables them to integrate with other systems, Unqork enables you to build one quickly. As a result, Unqork applications automatically ingest data from legacy and/or third-party sources, and then pass on critical information to other downstream systems.

And Creators can make it happen without writing a single line of code.

2. Modernize ERP and other underlying systems without disrupting user-facing services

Just as no-code enables you to quickly build applications that connect to your current tech stack, it also gives you the flexibility to evolve your infrastructure running underneath—without impacting the digital services you’ve built.

As a result, you can evolve your stack with agility, rather than become limited by ERP suites that have “complex, rigid structures,” in the words of Bain analysts. What most companies need instead are “flexible systems that allow them to respond rapidly to customer needs and new opportunities,” the analysts continue.

No-code is designed to help you achieve exactly this goal. You can build innovative digital services now, and as your stack evolves, simply integrate new tech components into existing services with the same ease with which you originally created them.

Let’s say you want to replace your legacy CRM system with a state-of-the-art solution that will help you drive new revenue. The challenge is, you have a number of critical custom applications running on top of your legacy CRM solution. In the past, the time, cost, and risk of building new integrations would offset the gains from the new solution. With no-code, you regain the ability to innovate your stack, knowing that you can connect existing digital services to new underlying systems quickly, easily, and with minimal disruption.

Highly skilled developers are expensive. Even during the 2020 economic slump, their salaries kept rising. In fact, the chronic shortage of tech talent is only growing. A recent Gartner survey found that 63% percent of respondents considered the lack of tech talent a key concern for their organization. 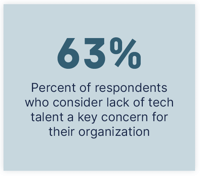 With no-code, you can address this challenge by empowering less experienced coders and non-technical business users to perform tasks without any of the complex syntax of traditional programming languages. In the process, you free Creators up to focus on what really matters: Business logic and the flows of the applications they create. At the same time, you free experienced developers from routine tasks, so they can tackle more complex, value-add challenges.

In this regard, there is a big difference between no-code and low-code. Yes, low-code developers can reuse blocks of code in order to speed development. But ultimately, they still need some mastery of common coding languages. By contrast, no-code literally means “no code.” And whereas it can take a year or more to learn a new programming language, Creators can start building applications with Unqork in a matter of weeks.

The result: You drive down the costs of development for the long term, and free up experienced developers for critical tier-1 applications and other more strategic projects.

Welcome to the future of enterprise application development

Technical debt—the cost of managing suboptimal code that was fast to implement but difficult to maintain—is “the top challenge for infrastructure and operations (I&O) leaders,” Gartner analysts write. In 2018 alone, the cost of technical debt to the US economy reached $2.84 trillion, according to one CISQ study. 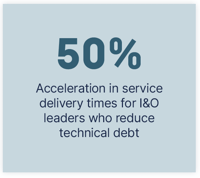 Organizations typically accrue technical because, in the rush to launch a service, developers lack the time or skills to ensure proper definitions, documentation, testing, and integrations. No-code helps stop technical debt in its tracks by eliminating the creation of new code that will require the time and expense of manual maintenance and updates, not to mention the risk of introducing bugs or even more serious security flaws.

Hand-coded applications typically have 13 issues in every thousand lines of code (KLOC). As a result, developers spend a huge chunk of their week hunting down and squashing bugs—often half their time and in some cases up to 75%. The cost: More than $100 billion annually in the US alone. 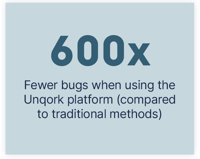 With a no-code platform like Unqork, Creators never create code-based bugs inadvertently, because they never have to write or edit code at all. They only use pre-built configurable components that have already undergone state-of-the-art QA processes that combine a global team of testers with advanced testing automation. In addition, Unqork engineers ensure that components remain stable and bug-free, even as they evolve over time.

The result: The Unqork platform in 2020 averaged only .02 bugs per 1,000 lines of codes—a 600x improvement over traditional coding. This frees up tech talent to focus on innovative, value-add projects, instead of the tedious, time-consuming, and never-ending work of squashing bugs.

In highly regulated industries like financial services, health care, and government, compliance has been a serious drag on digital innovation. As the first true enterprise-grade no-code solution, Unqork reverses this trend. You can innovate quickly while letting Unqork’s platform do the heavy lifting, thanks to a comprehensive program that bakes security and compliance deep into the DNA of the Unqork platform, as well as each component and microservice Creators use to build applications.

The platform is safeguarded by security policies that protect against unauthorized access, while preventing and/or mitigating attacks that compromise performance and availability. By default, web applications built with Unqork live in a single-tenant instance, reducing the risk of unintentional data loss. And Unqork regularly validates its platform against rigorous global security and privacy standards, including SOC 2, GDPR, and HIPAA.

Key security and compliance capabilities include:

In short, you no longer have to choose between security and innovation. On the contrary, enterprise no-code can actually reduce your overall attack surface, eliminate software vulnerabilities that have been around for decades, and drive down the risk of losses related to security breaches as well as non-compliance.

Despite the pressure to move faster, development timelines have, on average, actually grown longer in recent years. According to one study, it takes developers 20% more time to build enterprise software today than it did in the 2000s.

No-code doesn’t just reverse that trend. It actually accelerates development over the long term, thanks to reusable microservices. For example, the Unqork platform supports auto-generation of APIs in a consistent and uniform format. Development teams can quickly reuse and share APIs, while also ensuring documentation is up-to-date. As organizations continue to migrate away from monolithic legacy applications and toward microservices architecture, the instant, automated documentation of APIs is especially valuable.

Similarly, the Unqork platform automatically tracks and documents alterations in data models. As a result, Creators can develop software with ever-greater speed without sacrificing data modeling control and governance.

Furthermore, the new Unqork Marketplace enables Creators to easily discover and download pre-made, industry-specific application elements built by a growing roster of technology partners, systems integrators, and fellow Unqork Creators. With Unqork Marketplace, you can seamlessly add an ever-growing list of enterprise functionality to your applications without writing a single line of code.

“The combination of common best practices in the software development life cycle and speed of developing reusable components and APIs to support the user interface that Unqork offers has put us on a track to release and iterate that no competitors could do at this cost," says Tyler Danielson, Chief Technology Officer, FOXO Technologies.

Importantly, speeding iterations doesn’t just save money in the short term. It allows you to capitalize quickly on new opportunities as they arise. It enables you to respond quickly to market disruptions that are hard to predict, even when they are lying just around the corner.

When every company is a software company, long-term value depends on the speed with which you create innovative, enterprise-grade applications. By taking friction out of every step of the development process, no-code is giving digital laggards, including those operating in compliance-heavy industries, the chance to compete in the age of disruption.

To learn how no-code makes this possible, sign up for a demo now.

Welcome to the future of enterprise application development