Code No More: The Power of Visual Programming

Over the past several decades, the north star in enterprise software development has been to build faster, faster, faster. Anything developers and enterprises could do to hasten time-to-market was good. These improvement efforts included the evolution of preferred programming languages from COBOL to Java to Python as well as new software development methodologies like Agile, Scrum, and Kanban.

And for many decades, these efforts succeeded in making developers more productive. But then, something strange happened. Around 2010, developer productivity began going in the other direction.

Research shows that developers were creating software 20% slower than they did in the aughts despite the advances in languages and methodologies. There are several reasons enterprise development suddenly became more difficult, but the chief drivers are:

What ties these three trends together? Code. This is why enterprises are increasingly sidestepping editable codebases altogether and embracing visual programming approaches such as no-code application platforms like Unqork.

In this eBook, we will explore the power of visual programming and how it can help your organization innovate at speed, stay ahead of the competition, and lower overall costs while increasing your productivity and efficiency.


Designer 101: An Introduction to Enterprise Visual Programming with Unqork

What is visual programming?

Visual programming is a development method that empowers developers to define complex processes using modules, components, and illustrations rather than text, which is a far more intuitive way for humans to convey ideas. 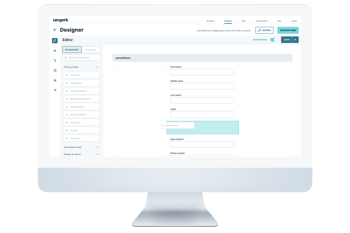 Before moving forward with visual development, let’s break down the nature of traditional code-based development. Code is, at its core, a series of instructions presented into a language that a machine can understand. When building with a traditional code-based approach, developers must “translate” each step in the instructions into machine-readable code—and if one piece of syntax is out of place, the whole program can break. Modern visual programming tools such as Unqork provide a layer of visual abstraction between the developer and those instructions. This simplification makes building software faster and more accessible while eliminating the possibility of human coding errors.

Visual programming isn’t a radical new technological innovation. It's actually been around for nearly as long as text-based coding. There's a long history of using visual programming tools to build applications, such as flowchart-based systems like Pygmalion or GRaIL (Graphical Input Language.) Consumer-level applications and WYSIWYG web builders in the 1990s were also technically forms of visual programming.

Recently, visual programming has become a topic of renewed interest in the enterprise space thanks to advanced “no-code” platforms like Unqork which have been specifically designed for building robust applications in dynamic and highly regulated environments like finance, insurance, healthcare, and government—all without writing a single line of code.

"The ability to represent complex problems visually and let the platform translate it into executable code is one of the big advantages of Unqork."

Let's explore some of the specific benefits that visual programming can bring to your enterprise.

Visual programming eliminates—or greatly mitigates—programming bugs because it completely removes the need to write code, and therefore removes the possibility of human coding errors. (It, of course, would still be possible for a human to create a workflow or logic error, but Unqork has installed guardrails to automatically identify and alert users to potential problems.)

Platforms like Unqork use modules, components, and illustrations instead of text, which frees developers from ever needing to type out code themselves. The QA team at Unqork ensures that all components behave as intended and work in harmony with all other elements. So organizations never need to invest resources in perfecting syntax or ensuring that elements are properly integrated with one another. Indeed, a recent analysis has demonstrated that building with Unqork reduces bugs by more than 600x.

The average software application comes with 300,000 lines of code. Building, maintaining, and organizing all that code demands resources. If your development teams are still relying on a traditional code-based approach, they're spending a lot more time and effort than they would be with a visual-based system.

Visual programming reduces the need for these resources because it moves developers one step away from the code itself. Developers can use the drag-and-drop nature of the platforms to achieve the same functionality as hand-coding in less time and with less effort.

Visual development makes development on average three times faster than a traditional code-based approach. Recent history has demonstrated that no-code application platforms can help deploy complex solutions in a matter of days, that might have otherwise taken several months to go from ideation to production.

"What you get with no-code—and specifically with Unqork—is an opportunity to let operations teams and business teams innovate without relying entirely on overworked and under-capacity technology teams."
—Chris DeBrusk, Partner, Oliver Wyman

Visual programming is a far more intuitive approach to development than a traditional code-based approach and can be picked up far quicker than a new programming language. This is particularly apt with younger “digital native” workers who have grown up using technology as a tool for analysis, research, and self-expression. Visual programming combines all of these things, and is often easy for these younger generations to pick up.

The intuitive nature of visual programming empowers non-technical business users to directly take part in the development process rather than relying on IT. Since the platform takes on the “heavy lifting” of development, less-experienced developers can produce the same quality of builds as their more-experienced colleagues.

Visual programming allows organizations to be more flexible in cultivating their development workforce. Less-experienced developers and business users can be assigned to routine maintenance or upgrade activities, while more senior engineers spend their time addressing unique or complex functionality.

This flexibility is becoming increasingly crucial as the impact of the “IT Skills Gap” is predicted to expand and industries around the world are forced to become even more competitive for a limited number of IT workers. 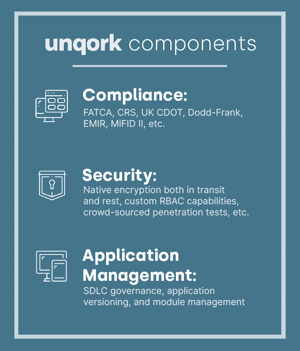 Advanced no-code platforms like Unqork streamline the development process within sprawling ecosystems so developers can focus on overcoming business challenges instead of technical ones.

Complex workflows and capabilities are built with drag-and-drop logic blocks, while behind the scenes, the platform takes care of security compliance, component upgrades, and much more.

No-code platforms provide business and IT users alike peace of mind in that their applications and software will always comply with business, industry, and legal requirements, no matter the situation.

Legacy code is a bit of a catch-all term that developers use to describe:

Most developers will say that all code is legacy code because it becomes outdated the moment it's compiled and released.

With each new enhancement or fix, a codebase becomes more complicated for the next developer that must work on it. Research has shown that developers spend an average of 17.3 hours a week studying code and figuring out how to shoehorn their changes into it so that it doesn't break the application. The continuous stream of resources required to maintain legacy code is known as "technical debt."

Technical debt is a general term representing the effort required to fix problems remaining in code that's released into production.

Your company's technical debt grows every year, so if you want to eliminate it entirely, it's time to switch to visual programming. A no-code platform reduces technical debt right away by speeding up the overall application development timelines and eliminating code maintenance entirely. Developers don't need to study the code anymore to see how their predecessors did it. The no-code platform handles all of it "under the hood," so they can concentrate on the process the code solves.

The future is visual

Visual programming isn't a new idea, but its latest iteration—no-code—takes the concept to the next level. Companies looking to create an innovative environment that fosters creativity and collaboration need to adapt sooner rather than later if they want to remain competitive in today's rapidly transforming world.

At Unqork, we believe that visual programming, and no-code in particular, is the future. No-code makes it easier for any user to harness the power of technology to create new and complex enterprise applications without ever having to write a single line of code.

Want to learn more? Schedule a personalized interview with one of our in-house no-code experts.